With a metropolitan population of 26 million people, Seoul is the equivalent of multiple cities put into one. The city is so immeasurably vast that even with one of the most efficient transit systems in the world – which includes subways, buses and even a Maglev – it can easily take more than an hour to travel from one neighborhood to another. (And let’s not mention the city’s dizzying subway map that, to my North American eye, looks more like the circuitry on a computer chip than any helpful commuting guide.)

If you’re a student like me and you don’t want to risk getting lost in the world’s fifth largest metropolitan area, I’ve prepared a guide of the five best neighborhoods for young people travelling in South Korea’s capital. (Spoiler alert, Gangnam is not part of the list, which I wouldn’t recommend unless you have the means to rent a Ferrari to blend in). Instead, these are five hip, bustling neighborhoods; ideal for a fun night out or a lazy afternoon spent at a café. 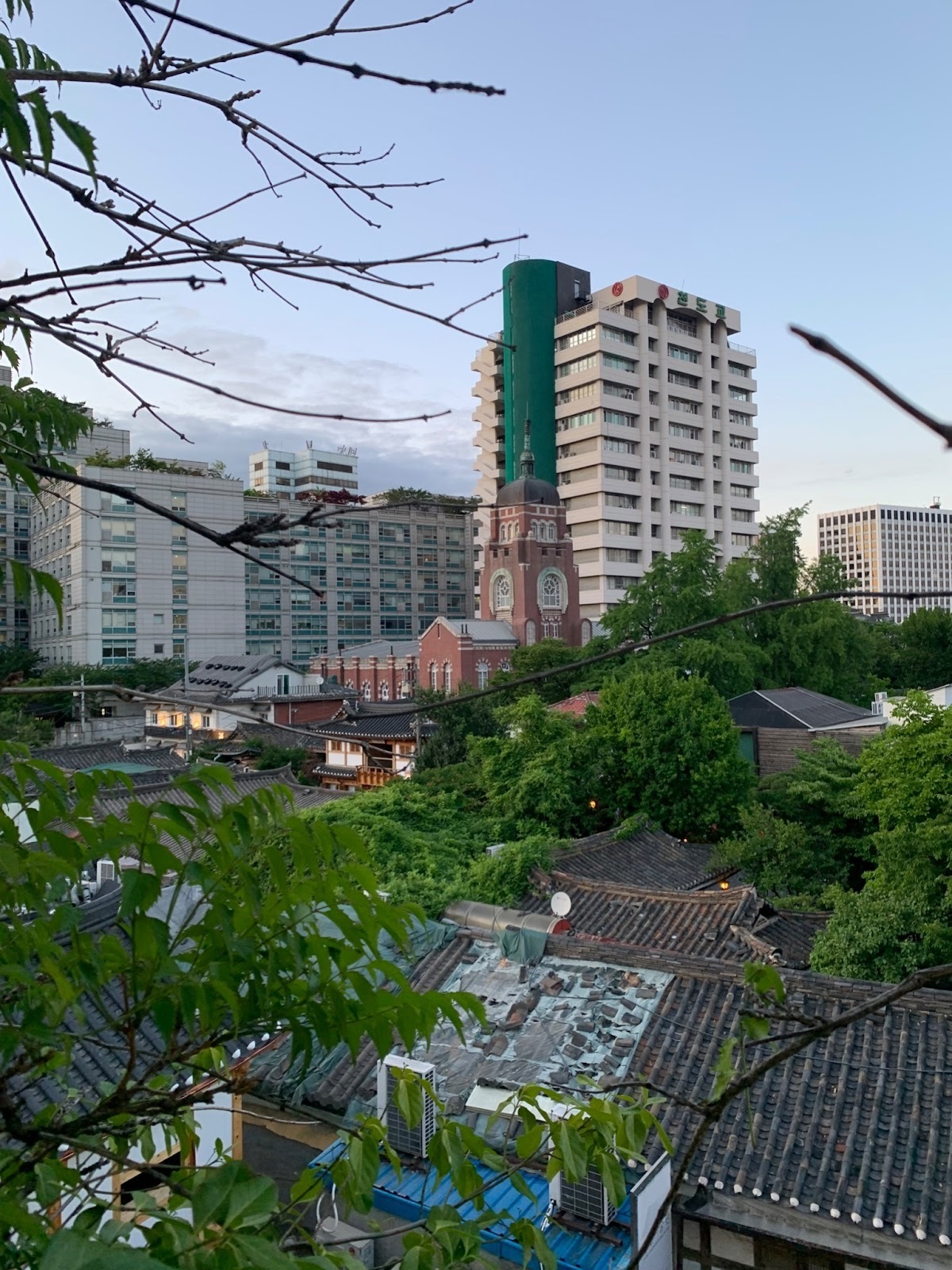 This is probably the best known party neighborhood among foreigners, for good reason. Located within commuting distance of Yonsei University and walking distance from Hongik University, Hongdae is your one stop shop for all your partying cravings: in need of a good bar with cheap drinks and free arcade games? Funky photo booths to take pictures with your friends? Fried chicken at 2 in the morning? Hongdae’s got you covered.

Some personal favorites are Corner Pub, FF, Thursday Party, Antler Pub, Zen Bar and Hideaway (if Zen bar’s line is too long) – whatever time of night or day of the week, Hongdae is a surefire spot for a fun time in town.

Conveniently nestled next to Yonsei and Ewha Women’s University, Sinchon greatly benefits from the influx of students into the neighborhood. Whether you want to do work at one of the countless stylish cafés along Yonsei-ro, grab a Katsu meal for lunch or go to a Soju Bar in the evening, Sinchon does not disappoint. If you’re in for a little entertainment, be sure to catch the street performers near Sinchon station: they never fail to impress. 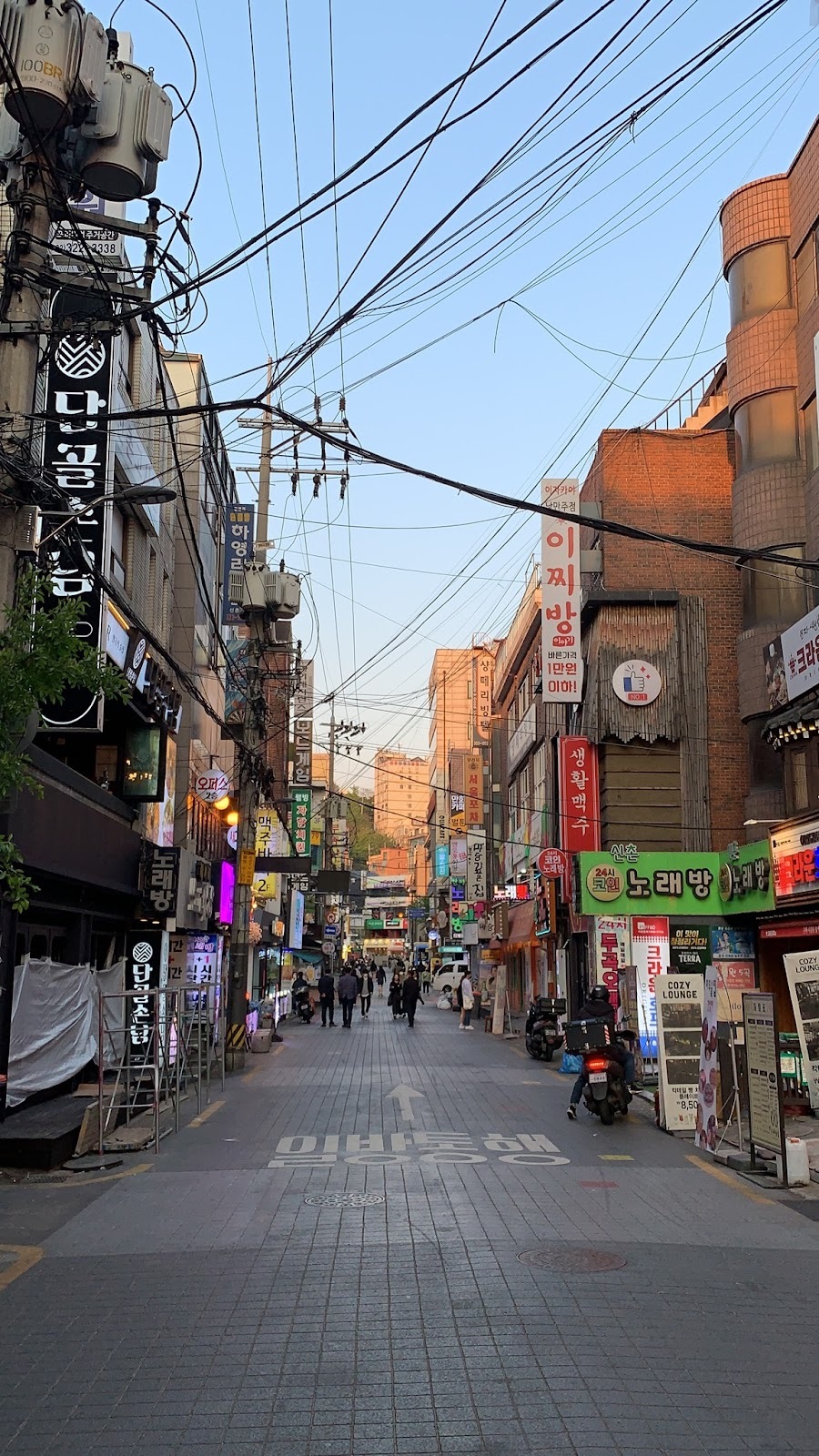 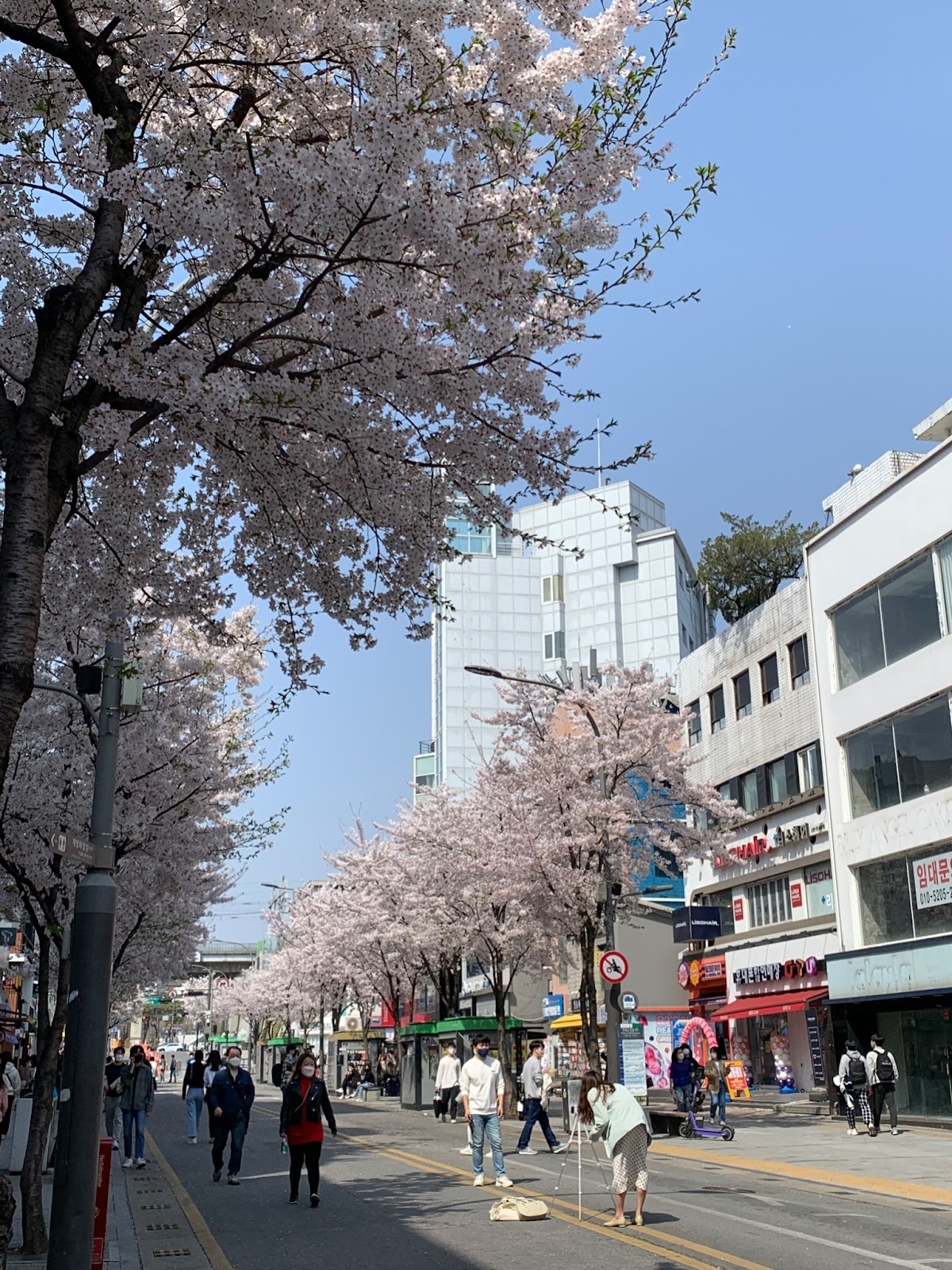 Sinchon in April, during the brief cherry blossom season

This hilly neighborhood features a truly fascinating mix of cultures, functions and histories. Along the zigzagging roads on the top of the hills you’ll find many of the world’s embassies and some US military buildings tucked behind imposing gates and lush gardens (reminiscent of the Park family’s wealthy neighborhood in Parasite). But there’s no need to schedule a consular visit as an excuse to visit the area; instead, walking up the steep streets will reward you with small, well kempt parks that offer some of the most impressive views of the vast city (without the crowds of places like the Namsan Mountain Park).

Down the hill resides Seoul’s International District, where a large proportion of residents are foreigners and where reside some of Seoul’s most multicultural restaurants and bars. Here, you’ll find restaurants selling Turkish kebabs, Thai noodles and Mexican churros all crammed together.

Though clubs and bars are less oriented to foreigners here than in Hongdae, Itaewon cranks up the nightlife by a notch or two. Steps away from the Itaewon subway station is one of Seoul’s liveliest nightclub streets: K-pop clubs, Hookah Lounges, Hip Hop bars and Latin clubs all co-exist in one clamorous bunch. For fans of electronic music, there’s also thriving Techno scene with underground venues peppered throughout the neighborhood.

It’s unfortunate that this neighborhood is overshadowed by nearby Hongdae, Hapjeong because it’s one of the most pleasant and homely places in the city. The area is teeming with chic cafés (enough to fill any architect fan’s daydreams), artisan bakeries and local bars. It’s a fresh contrast to the bland over-commercialization of many other neighborhoods and well deserving of the name of “Hispter’s paradise” – as the Korea Times has called it.

To my surprise, I even found a ‘French-Canadian’ restaurant in the neighborhood. Although it was closed for the day, I was able to meet the owner – a fellow Montrealer – and we had fun comparing the things we missed the most about our hometown. It’s one of the charms of Hapjeong: keep your eyes open and you’ll find hidden gems.

Home to Seoul’s other large university, Korea University, Seongbuk is perhaps a smaller version of Sinchon, which makes for a tight knit student community. During the day, I highly recommend visiting KU’s large and breathtaking campus. In the evening, head to the underground (as in literally underground) student Soju bars where you can partake in the drinking and singing games which are a staple of student life here. These are incredibly social spaces and an excellent way to make new friends, Koreans and foreigners alike.